Scale and quality play a big part in the choice of candidates for an award. We have distant memories of the delightful Strawberry Bank with its row of cottages and town houses with small gardens fronting a pathway across which long gardens occupied the south-facing bank. Well-known characters like musician Julian Rosetti and artist Charles Hemingway lived here, but the expansion of Town and County Motors from its adjoining site in Justice Mill Lane led to the end of the little domestic oasis (you can put away your hankies now!) The site has limitations and when we saw the steel and concrete structure rising from the depths, we though – ‘This ain’t going to work,’ but occasionally we’re wrong! What we have starting from the west, past the great Art Deco bulk of the former Uptown Baths is a glimpse of a new Travelodge on the site of Galloway and Sykes’ Depository giving a vertical break before the splendid office/hotel building with its powerful ground floor, massivepiano nobile crowned by a strong cornice feature and attic storey above. Who said classical architecture was a thing of the past? The whole development has given a new scale and distinction to Justice Mill Lane.

However, how do you give character to such a big fish in such a wee pool? The details are carefully thought out. In the hotel, the deep and bulky central portion has had its comparatively small windows in scale with the rooms they serve linked together externally into units which reflect the scale of the walls in which they appear. These large areas of wall are further broken into an almost castellated feature where the lower windows are placed in a course where the wall colour is similar to that of the windows themselves and the paired windows above form ‘battlements’. The success of this device is appreciated most from the east side in the long view from Langstane Place. Hazledene (Strawberry Ban) Ltd are to be congratulated for their choice of Richard Murphy Architects and Miller Construction for the erection of this masterpiece!

Normally one wouldn’t go to a windswept industrial site on the north side of the River Don to look for another masterpiece. However Rubberatkins, with assistance of TCD Architectsand MTM Construction have done just that. Here is a business, which in most industrial sites would be housed in a Stuart of Old Rayne shed with a lean-to office – but No! We are led through a grand entrance portico standing next to a beautiful black polished wall. The office unit is well related to the large workshop block and even the downpipe for our Bridge of Don rainfall takes the form of a chain! The interior detailing is worked out as carefully as the outside – the whole concept is likely to trump any commercial development which has the nerve to appear north of Aberdeen!

When this house was divided into flats some years ago the single front door was replaced by two doors. In this case, admittedly, by doors of some quality and design as can be seen in the adjoining house at number 15. But it’s good to see one of these fine town houses returned to its original single occupancy and this accompanied by a total restoration of the original door. The work was done by John R Craig (Kintore) Ltd for Mr James Fyffe. 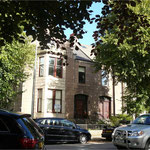 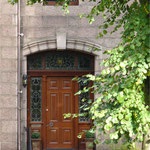 Camphill Village Trust, using their own Architects have created yet another wee gem in their estate at Newton Dee. Here, domestic scale, careful detailing and clever use of materials and colours are combined in this lodge in its woodland setting – contractor James C. Leask was the builder of this fairytale cottage.

As part of the construction of their new Headquarters First Group have restored and adapted the one-time Militia Barracks at Advocates Road/King Street. Janus Architectureexecuted the design and the work was done by Stewart Milne Group. The stonework has been restored along with windows, a more imposing entrance created and where the enemy was once repelled from shooting breaches in the wall, now Aberdeen’s current enemies are kept at bay on the crow steps of the building. The hard landscaping is also worthy of note – altogether this is a good restoration with a fine new wing replacing the former tram sheds and the like which once cluttered the site.

For a long time Langstane Place was an almost forgotten back lane to Union Street and Bon Accord Square. Recently new businesses have emerged fronting on to the street and Mr Nick Garrett’s Bauhaus Hotel is a significant contributor to this cause. The design reflects the plain Georgian proportions of the nearby Square and Crescent with an inviting entry, bold signage and some distinguished interiors with even a peek across Union Street to the Plaza, one of last year’s winners! Alken Construction were the contractors here and the architects were Fitzgerald & Associates, probably one of the last jobs in which the late Bob Fitzgerald had a hand.

Here is something we don’t often see in Aberdeen – really good manners in Planning Terms. West of the former Thomson’s Garage Showroom is a terrace of shops with flats/offices above, generally of two storeys in height with pitched, slated roofs. At the far end one could have indulged oneself in a large, striking termination to this terrace. But what has been built is a block reflecting the scale, character and materials of the original terrace ending in a granite gable wall – congratulations! Here Redco Assets entrusted their scheme to TCD Architects and Anderson Constructions (Aberdeen) Ltd

This was originally the site of Aberdeen’s biggest cinema – the City had a seating capacity of 2000! You will maybe remember that it then became a bowling alley and car park. The site has now been occupied by a hotel and this residential development. Members weren’t happy with the appearance or materials of the hotel part of the development but felt that this square restored some generous and well designed residential accommodation to part of the city previously dominated by run-down commercial activities and certainly deserved a Mention. This Bancon Homes development was conceived by Mackie, Ramsay & Taylorarchitects.

This development is on the site of the former College of Education and includes redevelopment of some of the student residential blocks. These new build blocks with their varied skyline and spiky balcony details fit well into this multi levelled and generously treed site. Architect Yeoman Mc Allister designed this scheme for Cala Homes.